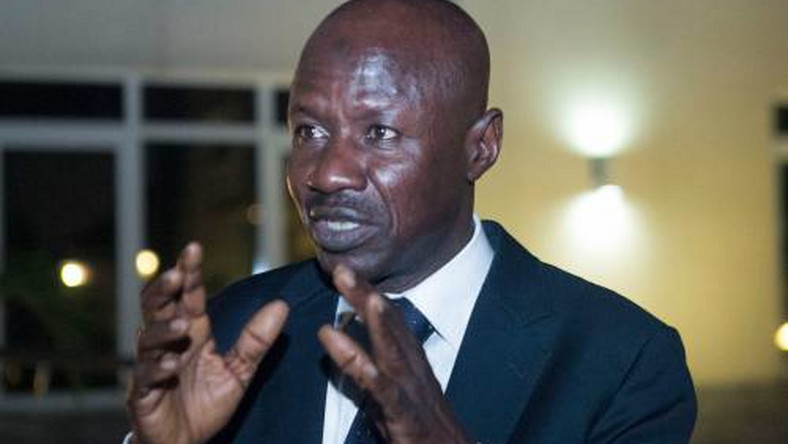 There was a shouting match between security personnel and orderlies attached to the acting Chairman of the Economic and Financial Crimes Commission (EFCC), Ibrahim Magu, in Wuse, Abuja, before the anti-graft czar was driven to the nation’s presidential villa, sources say.

The EFCC has refuted that Magu was arrested on Monday, July 6, 2020. The Department of State Services (DSS) has also denied arresting Magu.

The EFCC also clarified that the embattled Magu “honoured an invitation by a presidential panel reviewing the activities of the EFCC, at the Banquet Hall wing of the presidential villa, Abuja.”

Act. Chairman of the Economic and Financial Crimes Commission (EFCC) Ibrahim Magu and DG of the National Youth Service Corps Maj. Ibrahim during a briefing[Twitter/@officialEFCC]

Premium Times reports that Magu was arrested at the entrance of the Wuse II EFCC office by security agents believed to be operatives of the Police Force Criminal Investigation and Intelligence Department (CID).

The online newspaper also reports that the scene was anything but civil and pretty.

Premium Times quotes an eyewitness as saying that the EFCC boss’ convoy was stopped by armed security agents “but Magu’s security details challenged them.”

The incident would lead to a shouting match between armed operatives from both groups for several minutes.

“With the type of vehicle that was used, it was clear that they were not criminals but security agents. Magu’s escorts then came out to challenge the security agents. That led to some shouting match for several minutes. Magu then agreed that he would go with them.”

A security official told the newspaper that although “the security agencies came with two official vehicles, they allowed Magu to stay in his own car on conditions that one of the security agents sits with him.

“He was then driven away to the presidential panel afterwards.

“It was still Magu’s driver that drove the car (with Magu inside) with one officer, and one of the security agents that came to arrest him. The first security car that came for him was in front, the second was at the back of Magu’s car and his own convoy joined up to the presidential villa.”

There are reports that Magu was detained overnight.

Appointed acting EFCC Chairman by President Muhammadu Buhari in 2015, Magu has had a running battle with the DSS and Attorney General of the Federation Abubakar Malami for quite some time.

In 2016, the DSS wrote a stringing report accusing Magu of living large in a N40 million mansion, flying in private jets and receiving kickbacks from persons he should be investigating for corruption.

Malami urged the president to sack Magu whom he accused of insubordination and diversion of assets recovered by the EFCC.

The Bukola Saraki-led 8th senate twice refused to confirm Magu following allegations of corruption, submitting that he lacks the integrity to lead the anti-corruption agency.

The presidency is yet to send Magu to the Ahmad Lawan-led 9th senate for confirmation.