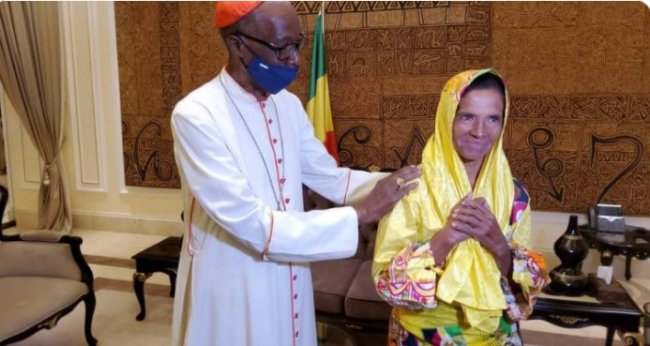 A Franciscan nun from Colombia kidnapped by jihadists in Mali more than four years ago has been freed, Mali’s presidency has said.

Sister Gloria Cecilia Narvaez was taken hostage on February 7, 2017 in southern Mali near the border with Burkina Faso where she had been working as a missionary.

A statement on the presidential Twitter account paid tribute to her “courage and bravery” along with photos of the nun taken after her release Saturday.

“I am very happy, I stayed healthy for five years, thank God,” the nun said, smiling and wearing a yellow robe.

Her liberation had been the fruit of “four years and eight months of the combined effort of several intelligence services”, the presidency said.

In the official statement, Goita assured that “efforts are under way” to secure the release of all those still being held in Mali.

“We prayed a lot for her release. I thank the Malian authorities and other good people who made this release possible,” the archbishop said.

Sister Gloria, 59, was kidnapped near Koutiala, 400 kilometres (250 miles) east of Bamako. She had worked as a missionary for six years in the parish of Karangasso with three other nuns.

According to one of her colleagues, Sister Carmen Isabel Valencia, she offered herself in place of two younger nuns the kidnappers were preparing to take.

“She is a woman of a very particular human quality, down to earth……moved by the love of the poor,” Sister Carmen said.

In Colombia, her brother Edgar Narvaez said he was very emotional after receiving news of her release.

“She is in good health, thank God. They sent me pictures and she looks well,” he told AFP.

In a letter sent last July by the Red Cross to her brother, Sister Gloria said she was held by “a group of GSIM”, the Al-Qaeda-linked Group to Support Islam and Muslims, the largest jihadist alliance in the Sahel.

A source close to the negotiations to release her told AFP she had not been ill-treated during her captivity and during that time she had learned the Koran.

Bound for Rome
An official at Bamako airport, speaking on condition of anonymity, told AFP the nun had arrived in the Malian capital on Saturday evening from where she was due to fly to Rome. Her departure from Bamako was confirmed by the city’s archdiocese.

In Colombia, Vice-President Marta Lucia Ramirez — who is also foreign minister — said she was “very happy” at Sister Gloria’s release, which she attributed to the work of the government and also stressed the “humanitarian efforts of the French government to contribute to this success”.

“Today is very good news for Colombia, but also for the national police for all the efforts made over the years to secure the safe release of our compatriot,” he said.

Vargas said meetings had been held with several European and African ambassadors to try to secure the nun’s release.

“With Interpol, and with other international organisations, we have always sought to bring those responsible to justice.”

There were irregular reports about the nun over the years, including at the beginning of 2021, when two Europeans who managed to escape captivity reported that she was well.

Then in March, her brother received proof that she was still alive, passed on from the Red Cross.

It was a letter written in capital letters “because she always used capital letters”, containing the names of their parents and ending with her signature, he told AFP earlier this year.

Mali has been struggling to contain a jihadist insurgency that first emerged in the north of the country in 2012, and which has since spread to neighbouring Burkina Faso and Niger.

Kidnappings, once rare, have become more common in recent years as a security crisis has deepened in Mali, particularly in the centre of the former French colony.

French journalist Olivier Dubois was abducted on April 8 in northern Mali by jihadists affiliated with Al-Qaeda.

Dubois, who worked with several French news outlets, said in a hostage video that GSIM had abducted him.