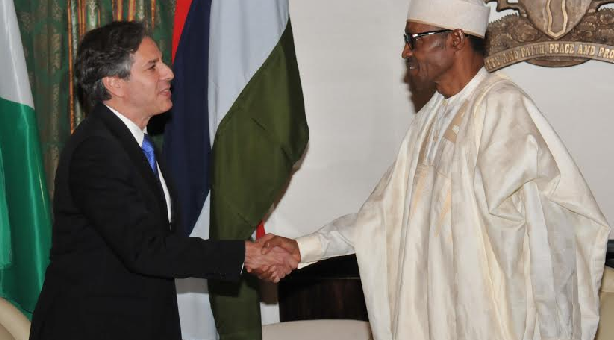 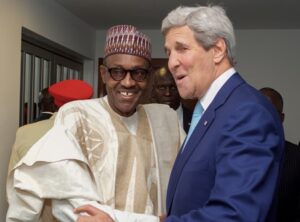 Buhari may have forgotten, but he first encountered Blinken, at that time the US Deputy Secretary of State, weeks after he took office in 2015.  Ironically, the issues that the two men “discussed” last week are the very same that they covered in 2015 when Buhari was preparing for his first state visit to the US.

Buhari told Blinken his talks with Mr President Barack Obama would boost his efforts to overcome terrorism and that Nigeria looked forward to greater US support for the multinational Joint Task Force against Boko Haram.

He then moved up in the world, arriving in the US where he was received like royalty at the White House by a gushing President Obama.

The American leader applauded Buhari’s “reputation for integrity [and] “to make sure that he is bringing safety and security and peace to his country…and a very clear agenda with respect to rooting out the corruption that too often has held back the economic growth and prosperity of his country.” 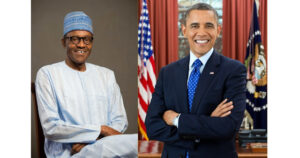 Obama looked forward to discussing security and counterterrorism, and “how we can be helpful in addressing some of the corruption issues that have held Nigeria back, and unleashing the incredible talent of the Nigerian people.”

Following that meeting, the White House issued a readout on July 21 which said, among others, that Mr. Obama “made clear that the US is prepared to increase support for a holistic effort by the Government of Nigeria to counter Boko Haram; one that protects human rights and brings together security and development tools to defeat Boko Haram and eliminate the factors that fuel extremism.”

Buhari also met with other top officials, notably the then-Vice President, Joe Biden, and they spoke about the “…ways in which the US and Nigeria can partner to overcome the challenges and seize the opportunities. President Buhari and the Vice President agreed on the importance of rooting out corruption in order to unlock the full potential of the Nigerian economy and ensure stability.”

This is the context in which Buhari’s meeting with Blinken last week must be evaluated for the embarrassment and shame that it was. As much as I criticise President Olusegun Obasanjo, for instance, he would have requested, and obtained a meeting at the highest levels.

Think about it: Buhari, a man who was celebrated in the White House in 2015, could not get a meeting even with Vice-President Kamala Harris, let alone Mr. Biden.  He could not speak with either official even by telephone, although they had in March spoken to the leaders of Kenya and the Democratic Republic of Congo.  In November, Biden had also called President Cyril Ramaphosa of South Africa.

From the rooftop of Buharimania in Washington in 2015, Buhari had become indispensable, inconspicuous and irrelevant, because of his policies at home and abroad, including nurturing some of the problems he had claimed he would solve.  And of course, Buhari sent to Washington DC for five years a man who was so old it was unclear he knew where he was let alone why he was there.

Last week, if Buhari loved Nigeria, he should have resigned.  Indeed, it is over three years since I first called on him to resign.  Now completely out of his depth, with his incompetence and insincerity spilling grave insecurity into every family and every street in Nigeria, Buhari was last week begging Blinken to beg Biden to send the exact same help the US offered him directly six years ago.

It was the same week that the inaugural Chandler Good Government Index (CGGI), ranking countries according to government capabilities and outcomes, placed Nigeria as the third worst on earth, ahead only of Zimbabwe and Venezuela.

Buhari’s response was to hold out his hat, saying that unless the US and other “strategic partners” came to save Nigeria, the consequences would spill over to all countries.  It was a reminder of his July 2015 visit, when at the US Institute for Peace he charged that by not selling weapons to Nigeria, the US had “aided and abetted” Boko Haram.

This was about the A-29 Super Tucano light attack aircraft Nigeria had sought to buy from the US for which the Obama administration, citing concerns about Nigeria’s human rights record, had placed a hold.  That would get worse after the Nigerian Air Force ‘mistakenly’ bombed a refugee camp in Rann, Borno State, in January 2017.   Over 100 refugees and aid workers were killed.

The core of the matter is simply that the Buhari administration has never demonstrated commitment to the task, or competence in implementation.  He did not read the papers he signed, and never took seriously the subject of human rights.  And as he nurtured corruption and nepotism at home, he somehow hoped that everyone around the world was also deceived.

But everyone has seen the past couple of months for instance when he finally changed his service chiefs, he moved swiftly to protect them from being indicted for war crimes by converting them into “ambassadors.”

Similarly in 2018 as the herdsmen violence began to expand, he told the United Nations General Assembly that the insurgencies in the Sahel and the Lake Chad Basin featured “runaway fighters from Iraq and Syria and arms from the disintegration of Libya.”

Earlier, in April that year, he told Justin Welby, the Archbishop of Canterbury, that the killer herders had been trained and armed by former Libya leader Muammar Gaddafi, and subsequently “escaped with their arms.”

And yet it was the same killers, who had, among others massacred over 70 Nigerians in Benue State on New Year’s Day three months earlier, with Buhari urging the leaders of that state to “accommodate your countrymen” (the killer herders); and “restrain your people” (the victims).

Three years later, Buhari is begging the world to send the calvary to rescue his government from the same mess he has nurtured for six years.

The truth is that while relocating the AFRICOM Headquarters to Africa might help to put out one or two brushfires, and while friends and partners may send other resources, the real problems (and solutions) are in his hands.  The cynicism and duplicity of Buhari’s government has proved to be Nigeria’s biggest challenge.

Every society needs a leader who can think beyond himself, and for the public good.  Buhari thinks in indecisive fragments, pandering to hidden agendas.

It is his contradictions and arrogance that are responsible for the chaos and insecurity in Nigeria.  For Nigeria to slide back from disintegration, it must have a leader with a national vision and focus: a leader who is persuaded and led by the mammoth challenge of justice, poverty and accountability.

In essence, that is what Blinken was saying to the African media after his meeting with Buhari.  Perhaps Buhari, because he ignores the local press, did not read that encounter.