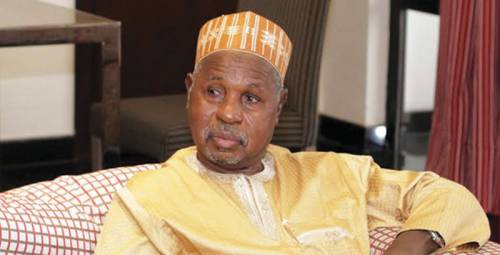 The Governor of Katsina State, Aminu Bello Masari, has condemned his colleagues agitating for collection of Value Added Tax (VAT) by individual states, describing the move as a joke.

Consumers pay VAT when they purchase goods or obtain services. All goods and services (produced within or imported into the country) are taxable except those specifically exempted by the VAT Act.

The VAT rate was raised in Nigeria from five percent to 7.5 percent in 2020.

VAT collection by the Federal Inland Revenue Service (FIRS) on behalf of the Nigerian government has been a subject of controversy. The FIRS administers the tax and transfers the generated revenue to the three levels of government via the federation accounts allocation committee (FAAC).

Recently, a court in Port Harcourt restrained FIRS from the collection of VAT and empowered the Rivers state government to take charge.

After the ruling, Lagos and Rivers state governments passed laws to guide the collection of their VAT and warned FIRS to obey the ruling.

At a meeting last Thursday, other governors from the Southern region also adopted the position of the two states by endorsing VAT collection at the state level.

But Ebonyi State Governor, David Umahi, on Friday, denounced the position contained in the communiqué issued by southern governors as he kicked against decentralised VAT collection.

Speaking to Daily Trust, Masari said both Rivers and Lagos were reliant on population from other parts of the country to sustain their economy, expressing surprise that the governments of the two states would seek to exclude the rest of the country.

“First of all, this issue is before the Court of Appeal for determination, so I will not comment directly on it, but I will give you a scenario,” the Governor said.

“What is Lagos without the rest of Nigeria? The market Lagos is boasting of is dependent on the larger part of the country. Benin Republic has a port, Togo has a port; do they have the population to back up the ports? Without us providing the demand part, what will be Lagos?”

He said all states benefit from one another in revenue generation and no one should look down on another because of those configurations.

“VAT serves them and us. We provide the bulk of the market because without the rest of the states, what is Lagos or Port Harcourt?

“Any state that thinks it can survive in isolation is joking. We provide the demand that makes Lagos what it is.”

Masari, however, expressed support for devolution of power to allow states take the lead on issues of security and determine other fiscal issues according to their individual strengths.

The Governor said the devolution of power should factor areas of responsibility of states but should be mindful of exclusive roles of the federal government.

“If you devolve, in the real term of devolving, I want to be able to fix the salaries of governors, professionals, civil servants. As a Governor, I should not expect to earn as much as the Kano State Governor, not to talk of Lagos, because their bases of revenue are not like mine. But that does not take away my authority as Governor in Katsina, likewise a councillor in any of our local governments.

“Do you expect me to compare myself with a state that generates over N450billion internally when the best I have is between N12bn and N15bn?”