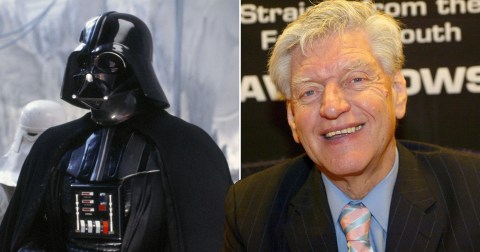 The 6ft 6in former body-builder played the legendary villain in the original Star Wars films.

The Bristol-born star — also road safety superhero The Green Cross Man — had been in a London hospital for two weeks with Covid. He was 85.

Luke Skywalker star Mark Hamill, 69, tweeted: “So sad to hear David Prowse has passed. He was a kind man & much more than Darth Vader.

“He loved his fans as much as they loved him.”

Because of the father of three’s stature, he played a variety of bad guys and monsters.

But daughter Rachel, 50, said: “He might have looked quite scary but as a person he was a sweet, kind and generous man.

“He really was a gentle giant. And to us he was our dad.”

Rachel, of Croydon, South London, confirmed Dave had previously been diagnosed with Alzheimer’s.

She added: “It’s horrible that Covid restrictions meant we did not get to see him and say goodbye.

“But when we went to collect his stuff from the hospital the nurse said what a cool guy he was.

“He was such a larger-than-life character. He would have loved to see himself trending on Twitter.”

Among his clients was Christopher Reeve, who he helped to train for the part of Superman.

In the 1960s and 70s he starred in cult series including The Saint, Department S, Space 1999, The Champions and Doctor Who, opposite Jon Pertwee.

On TV he worked with the two Ronnies, Morecambe and Wise, Benny Hill and Frankie Howerd. the Green Cross Code Man, appearing in a TV campaign and touring schools.

He was awarded the MBE for helping cut road deaths — before turning to the dark side as the legendary Sith baddie Vader.

Star Wars director George Lucas offered him a choice of parts, Vader or Chewbacca. Asked why he went for the former he said: “Everyone remembers the villain.”

Lucas is believed to have feared Dave leaked plot details — which he denied — and the pair had not spoken since Return Of The Jedi wrapped in 1983.

But last night Lucas said on the official Star Wars website: “David brought a physicality to Darth Vader that was essential for the character.

“He made Vader leap off the page and on to the big screen, with an imposing stature and movement performance to match the intensity and undercurrent of Vader’s presence.

“David was up for anything and contributed to the success of what would become a memorable, tragic figure. May he rest in peace.”

Darth Vader became one of the most iconic characters in cinema history and, until his retirement in 2016, Dave visited fan conventions all over the world.