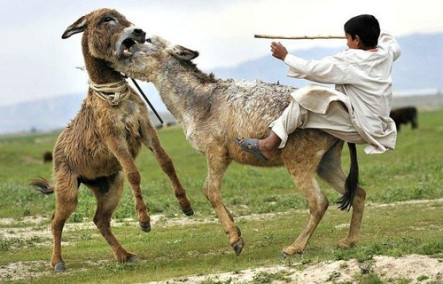 It starts off as a rite of passage ritual that fathers initiate with their sons and is carried on into their adulthood where men often end-up cheating on their wives with donkeys.

Colombians believe that boys should practice having sex with donkeys to prepare themselves for women, that it makes their penises bigger and also that it prevents them from becoming homosexuals.

This cultural practice is so widely accepted in Colombia that musicians have written songs about it, an author has written a book about it and there is even a festival that celebrates it.

You have to be careful trying to researching this topic of a a complete degenerated culture in Northern Columbia.  There is a lot of vile, insane and horrific videos on the net, that can give even adults nightmares and serious and damaging encounters with demons.

Before you do any research, please pray with a Christian friend. And watch the material you find together. Not alone.

The below video do not include scenes of Columbian men having sex with donkeys. But is is a testimony of small children telling how the fathers took them into the jungle, to pervert them selves with their animals.

When you see this kind of stuff, you understand that the destruction of all the inhabitants of Sodom and Gomorrah were fully justified. Just like the complete destruction of our last wicked generation will be just and fair.

I saw another video of a man who claimed to have had sex with hundred donkeys. The Northern coast around Cartagena has come the latest destination for “zoofili tourism”, a magnet for perverts from all over the World.  Sodomy is on the rise globally. “Gay tourism” is now promoted by global players in the tourism sector.

“Just as it was in the days of Noah, so also will it be in the days of the son of man. People were eating, drinking, marrying and being given in marriage up to the day Noah entered the Ark. Then the flood came and destroyed them all.

“It was the same in the days of Lot. People were eating and drinking, buying and selling, planting and building. But the day Lot left Sodom, Fire and Sulfur rained down from Heaven and destroyed them all.

“It will be just like this on the day the son of man is revealed.

The perverts share their experiences in Colombia. They up load videos on the Internet. This kind of dirt and filth is distributed into the computers of our children and their teachers by You Tube and Facebook.

Mankind still have got the chance to be saved from the coming wrath of God. Salvation is a free gift from God our Father. That mankind is lost and needs to be saved, must not be denied.

Not only do billions of people reject the blood of Jesus. Today,  Sodom is even promoted in churches all over the Earth in the name of Jesus.

The end shall take them by surprise. They will burn in the eternal flames of Hell.  Repent or perish.